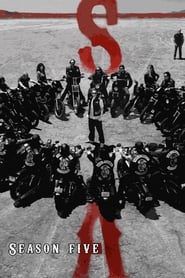 This season begins with Jax and Tara as the club’s new king and queen after learning the truth behind his father’s death and facing the consequences of the club’s illicit deeds. Stripped of his patch after Jax discovers he was complicit in John Teller’s death, Clay recovers from gunshot wounds that nearly killed him while Gemma is faced with a new life without the comfort of her family. With the threat of RICO still looming, Jax has to find a way to protect his family and save his club as SAMCRO is pulled into a conflict with a potent new enemy.