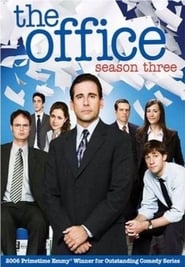 The season marked the move of main character Jim Halpert from Scranton to Stamford, and also introduced Rashida Jones as Karen Filippelli, and Ed Helms as Andy Bernard—both members of Dunder Mifflin Stamford—as recurring characters. Helms would later be promoted to series regular. The main plot for the early episodes of the season deals with a recurring problem in seasons one and two—the problem of company downsizing—while in the last half of the season, inter-office relationships also became a major plot point.