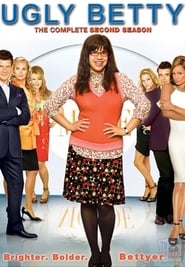 The second season of the American dramedy television series Ugly Betty started on September 27, 2007 in the United States and Canada and including a long, mid-season hiatus ran until May 22, 2008. The second part of the season began airing April 24, 2008. Due to the fan base gained in the UK, Channel 4 bought the UK rights to Season 2 so they could begin airing it only a week later than the USA. Due to the Writer’s Strike of 2007, Ugly Betty went on a hiatus in the UK after the airing of episode “Bananas for Betty”. Channel 4 announced that Ugly Betty would return towards the end of 2008 and when it returned on 5 September 2008, received 2.93 million viewers, according to overnight figures, which is a strong figure for Channel 4. The season would be the last season to be produced in Los Angeles before the show confirmed that it will move to New York City to complement the show’s setting in the next and last seasons.