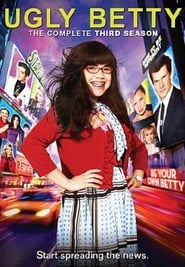 The third season of the American dramedy television series Ugly Betty was confirmed in the ABC lineup, which was picked up for a full season on February 11, 2008. The season premiere aired on September 25, 2008 and ended with a special double-episode on May 21, 2009. In Australia, Season 3 premiered on Tuesday, November 3, 2009 at 7:30 pm EDT. This took place as one of the first exclusive premieres on the new digital channel 7TWO, after over two years of erratic screening of the first two seasons on the Seven Network. In South Africa, Season 3 premiered on Tuesday January 13, 2009 in its normal 7:30.P.M CAT timeslot. Season 3 premiered in the UK on Channel 4 on Wednesday June 24, 2009 in the 10:00.P.M. slot, after Big Brother. It changed from Wednesdays to Mondays from Monday October 12, 2009. Episodes finished airing December 2, 2009. The season would be the first to be produced in the show’s setting, New York City in an attempt to take advantage of a credit change. However, the move would have side-effects as several cast and crew members prefer to stay in Los Angeles where the first two seasons were produced which resulted in contributing less onto the show. For example, Ashley Jensen, who plays Christina McKinney, opted to stay in Los Angeles and eventually left the show.